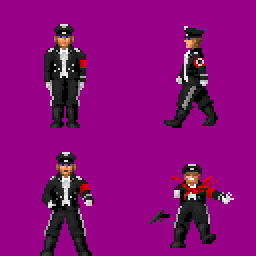 This is a guard set based on the Lost Episodes/Spear Mission Packs guard, which was edited by WSJ (more than a decade ago, wow!).
I edited the guard's uniform to resemble the mess dress variant, which can be viewed here:
Allgemeine-SS Officer Uniforms by Grand-Lobster-King on DeviantArt

I decided to use the LE guard because his physique matches that of the model used in Gran-Lobster-King's uniform showcases.
This enemy set can replace the guard, mutant, or officer.

The appropriate frames needed for each variant are included in the zip and are marked as "Alt" for alternate.

Feel free to use or edit with proper credit.