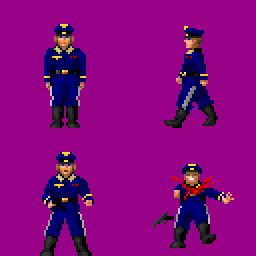 This is a guard set based on the Lost Episodes/Spear Mission Packs guard, which was edited by WSJ (more than a decade ago, wow!).
I edited the guard's uniform to resemble the Luftwaffe General, which can be viewed here:
Wehrmacht Luftwaffe General Uniforms by Grand-Lobster-King on DeviantArt

I decided to use the LE guard because his physique matches that of the model used in Gran-Lobster-King's uniform showcases. I also used it because WSJ made a Wehrmacht Heer General using the same guard base, so I thought it would be appropriate to follow the same approach for consistency.

This enemy set can replace the guard or officer.

Feel free to use or edit with proper credit.