As the developers of Wolfenstein 3D have always been a talkative and passionate group of individuals, a lot of cool historic information has been revealed about the game over the years.

As it turns out, the game was originally going to be an EGA release, and have a lot more elements of gameplay inspired by Castle Wolfenstein, including “looking under rugs for items”, “bulletproof vests”, and “dragging dead soldiers”, among other stealth features.
These were all ultimately scrapped in favour of faster paced gameplay, and the EGA version of the game was cancelled just one month into development, in favour of a focus on the VGA version.

Despite the early scrapping, elements of the EGA version from those early stages have emerged over the years. John Romero himself has a few times over the years spoken about it, in a post in 2001 and again in a tweet in 2014.

Thanks to a passionate Corridor 7 fan and Corridor 7 developer Les Bird a couple of years ago, Wolf3D.net was gifted with files that included more unreleased in-development sprites, including more EGA artwork, and other cut content (Including alternate boss colours). 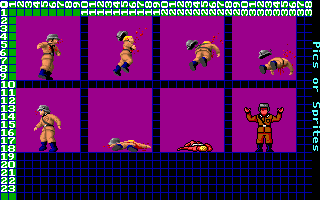 While many of the spritesheets are of items that appeared in the final game, this article has a .zip folder with a collection of the more historically interesting cut content. It's fun to think what could have been, had those original visions for the game came to be.