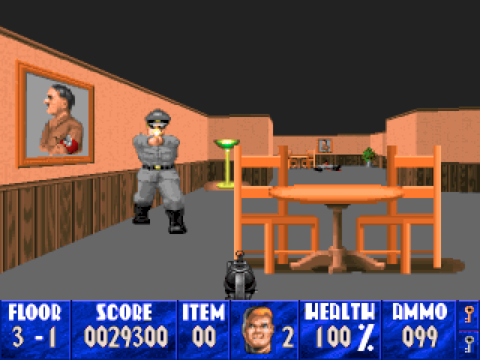 In December of 2021, a veteran of that community named "Dermuda" released "Dermuda's Mac Wolf3D Archive", a collection of hundreds of games created by members of the Mac Community.

Much like the PC version, a community of modders was spawned almost immediately upon the game's release, creating and distributing their own levels to enjoy. This community continues today, with new releases still coming out for the Mac versions of the game (An example being Oktoberbloodfest, the demo of which came out just last year).

Dermuda's collection has been in the works for years, and contains all sorts of projects from over the past two decades, from creators both unknown and prominent (Such as Laz Rojas and Clubey).
The collection also contains spreadsheets listing known information about the included projects, as well as a list of missing games that are suspected to be out there.

Using the archive requires either an old Macintosh computer, or a program that can emulate Mac OS 8.1 such as Basilisk II, but it is well worth it to see the plethora of games that were created.

While the archive has been released, Dermuda hasn't stopped work on it. In fact, they are still searching for designers and collectors who may have projects to add to the archive, updating it as notable releases are obtained.

If you are/were a designer of Mac Wolf3D levels, and still own copies of games/scenarios, Dermuda would very much like to get in contact either through the email address included in the download's documentation, or through Macintosh Garden. Spread the word!