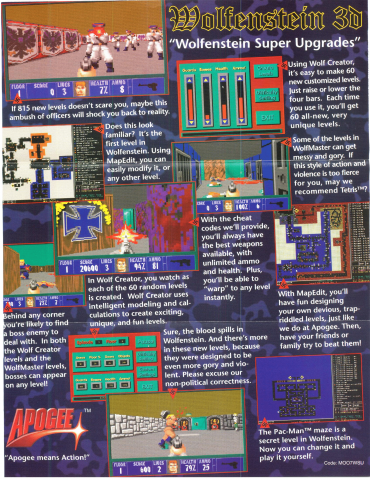 Even after DOOM was released, people still loved Wolfenstein 3D. This was obviously not just seen in the presence of an active modding community, but also in the further related releases other companies would put forward, such as Formgen's "Mission Packs" for Spear of Destiny which were released in the middle of 1994.

A few months later Apogee would release it's own unofficial add-on for Wolfenstein 3D, titled Wolfenstein 3D Super Upgrades. This release, along with the hefty claim of 815 included levels, also claimed it provided means for unlimited levels thanks to an included program called Wolf Creator. 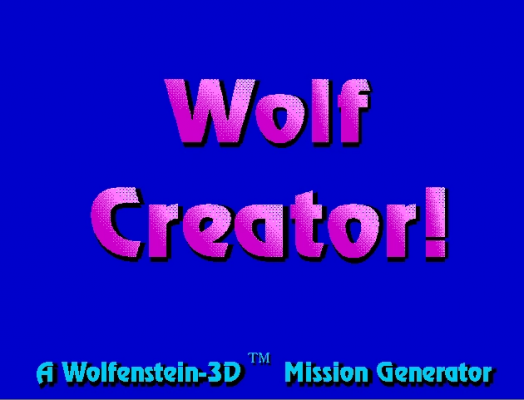 Wolf Creator is a simple random level generator developed for DOS by Alan Hemphill (with assistance from Chris New) under the name "Infinite Carnage". It is capable of creating a new set of 60 levels for Wolfenstein 3D with some basic input from the end user.

The program offers both a difficulty setting and more in-depth tuning of levels using a simple interface, in DOS. To create a new full set of levels for the game, all you had to do was tweak some scrollbars, and hit the Create Levels button to get started. Oh, and of course you needed a copy of the full version of Wolfenstein 3D. 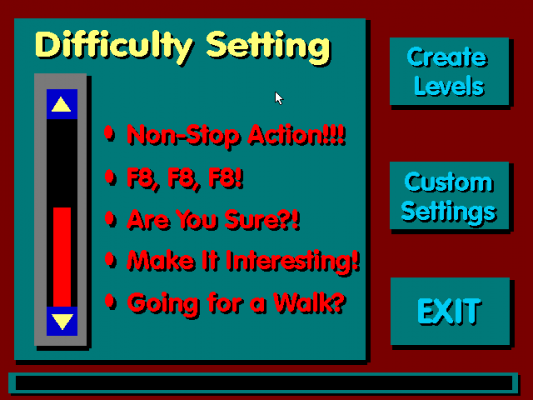 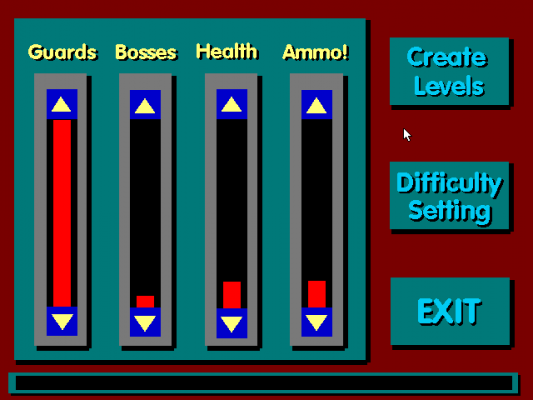 It is all very easy, and the concept is solid; the ability to create whole new Wolf3D experiences for yourself at the click of a button.

However, it has its flaws.

While the idea of randomly generated levels sounded great, the core of Wolf Creator maps weren't without their flaws.

The levels that come out of Wolf Creator were reasonably random according to the elements specified, but contained enough similarities that not only were they recognizable as Wolf Creator Levels, but were seen as very unimaginative and repetitive by a lot of people.

For example, the first level of each episode will quite often start with the player looking to a landscape blocked by objects, with a pool of ammo, a chaingun and an extra life in the room with you. 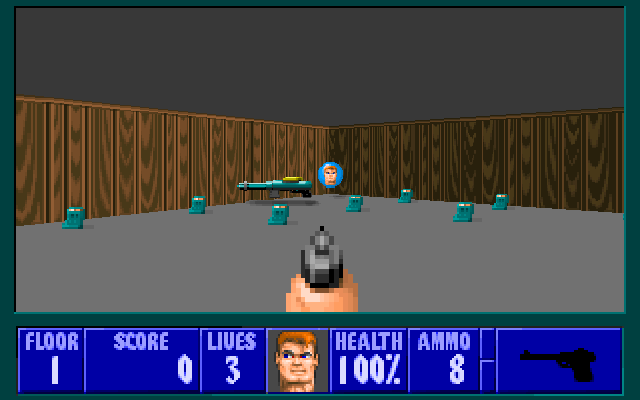 Generated Maps also make liberal of boss enemies; particularly Hans, Gretel and the Fake Hitler as they do not end the game. Rooms are rather bland, featuring a minimum of decorative objects, secret rooms often have multiple pushwalls (some of which aren't even usable), and these secret rooms are often large, while only containing a couple of randomly scattered objects to collect.

Given the quality of maps, Wolf Creator's hefty philosophy of providing unlimited maps for players was unfortunately limited in lifespan, as things became repetitive and lacking in creativity.

This lack of variety or polish didn't stop modders looking to it as a solution for their projects. Some used the Creator maps as a starting point, making modifications to make each a bit more personalized. Others used them to fill in gaps here or there in their projects, or as a temporary placeholder for an actual map. Then of course there were some users who just used Wolf Creator to churn out 60 maps, and released them verbatim as their own work.

Either way, the program apparently permeated through the modding community for several years, with a couple of games published sporadically annually utilizing it. This came to a near-halt in 2002 when the Wolfenstein 3-D Dome got several complaints regarding Wolf Creator content.

In the months immediately preceding the ban, several projects were published to the Wolfenstein 3-D Dome in close succession that made obvious and major use of the randomizer. Whatever the cause, this lead to an obvious repetitiveness in releases not enjoyed by avid and active Wolfenstein 3D fans.
This prompted an official news post on August 6th of that year, stating that projects built using the program will generally no longer be accepted.

That halt wasn't to stop all Wolf Creator content, though. Several projects like Pineapplestein 2 would have exceptions made for them, due to the other original and major changes implemented (Such as coding changes, original art) providing some variety.

As time has gone on very few people if any still seek to utilize the program for any reason other than curiosity, relying on their own mapping efforts or the mapping efforts of talented teammates.
This is probably in major part to the ban imposed at the Wolfenstein 3-D Dome (at the time the main HUB of Wolfenstein 3D modding) and other websites (This one included in most cases), as well as the shift to projects having higher production values, more coding changes and as such specific mapping changes.

Wolf Creator remains a part of Wolf3D history (For some, a darker time), and one of the few examples of random map generation we have in Wolf3D besides an equivilant but less popular Spear of Destiny Randomizer released by Formgen. Definitely a fun selling point for a Wolf3D "upgrade", but not much else.