Since the month of the shareware release of the game, Wolfenstein 3D Map Editors have been developed for level designers to create their own experiences in the game.

Initial public offerings of Map Editor were limited both in options and feature-sets. As time went on though, more people have thrown their hat in the ring, contributing new approaches and ideas in attempts to improve the design experience. Now, anyone wanting to design levels in the Wofl3D engine have a wide range of choices for how they want to go about it.

This is a small series of articles that will attempt to explain the storied history of map editing programs in the Wolf3D community.

When id Software was first coming together and the company was developing it's first games, John Romero created the map editing tool they'd need to work with games like Commander Keen, called TEd.

Though originally made for platforming games, TEd turned out to be a perfect choice for working with their first person engines as well, with TEd5 capable of creating the maps using a top-down tile view instead. 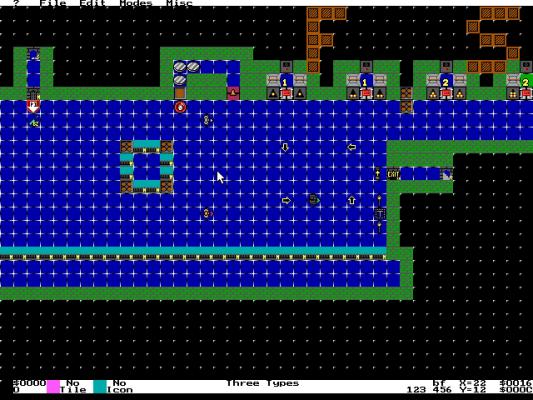 John Romero asserts that TEd5 ended up being used as the level design tool in over thirty games (From BioMenace to games like Corridor 7), and proved versatile enough to even be used in creating Rise of the Triad levels!

It was a powerful tool, and if a person is able to get the it running (as Chris Chokan of DieHard Wolfers did), it is a viable editor for people's projects. However, this was the tool of the professionals and would not be publicly available when the shareware version of Wolfenstein 3D was released.

Read more about TEd in this 2017 Gamasutra interview with John Romero. 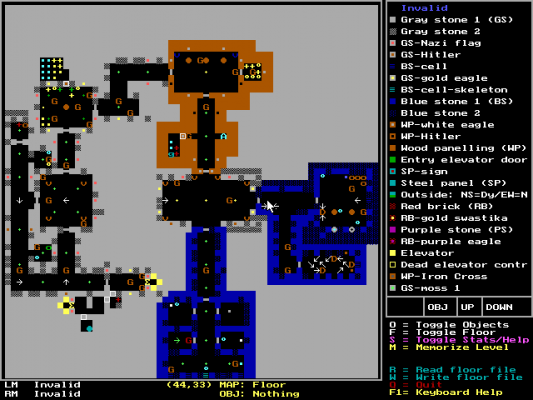 It's pretty well known that the shareware version of Wolfenstein 3D was released in 1992 on the 5th of May. It did not take long for the curious to start trying to open and access the data in the game files.

MapEdit's start to life relied on the work of Paul Hosken, who almost immediately following the release of the game created a program that could print out images of the maps (A great help to people who would get stuck!). It had turned out that for those with the knowledge, the tile-based design system was actually easy to translate and understand.
The code that would allow Hosken's "WMap" to read the game files would be borrowed by Bill Kirby to get MapEdit off the ground with reasonable speed -the program was released in early forms just over two weeks after Wolfenstein 3D's release- and start it's journey to becoming the community's primary editor during the 90s and early 2000s.

Of course, work wasn't to just immediately stop on the program. Kirby got the program out quickly, and as such it was incomplete in multiple areas. As such, several updates were released for MapEdit in it's first two weeks, with Kirby even opting to release it with the source code in June so others could potentially make improvements.

The release of the full version of Wolfenstein 3D would be followed within days by Kirby's final contribution to MapEdit, which was updated to be able to handle the newly released version of the game.

Thanks to Bill Kirby choosing to release the source of MapEdit though, this was not the end for the program.

Version 4.1 of the program was released in August of 1992, but while it was Bill Kirby's last contribution to the project, it would continue on thanks to the inclusion of MapEdit's source code in the published files since 4.0.

Multiple people would go on to create their own forks of the program at various points over the years, each making their own changes (Usually "quality of life") and releasing their "updated" version, sometimes under a new moniker.

Notable examples would include the release of "MapEdit 7.2", which is the last known version of MapEdit from that time to include the source code, and WolfenMap, released in 1993.
While most other releases were kept free in the spirit of the original program, WolfenMap's author Larry J. Shanker restricted the program to only be capable of editing the first two levels of a game unless a registration fee was paid.

Despite these forks, MapEdit itself would eventually find itself with a core development branch come April of 1993, when Bryan Baker released his own update attributed as "MapEdit v5.0", which added a detailed statistics section to the program and was itself built upon Dave Huntoon's Spear of Destiny compatibility update.

Dave would respond to Bryan's improvements the following month by releasing another update on top of v5.0, expanding on the features available to include copy/paste and Read/Write map functionality.

A back and forth of updates would happen between the two (With contributions from Matt Gruson) over the next couple of months, culminating in a final contribution from Bryan consisting of a vastly improved Help screen, and the removal of compatibility with shareware files. The latter change came about due to a request by Apogee that people stop editing the files of the shareware versions of the game.

Each of these updates would be accepted by the community and seen as improvements in the already dominant choice of Map Editor at the time.

Dave Huntoon and Bryan Baker would turn out to have bigger plans for the program, though.

After several updates iterating on top of each other's work, Dave and Bryan decided to start working together in the creation of future versions of the program. This collaboration resulted in major updates for the program. 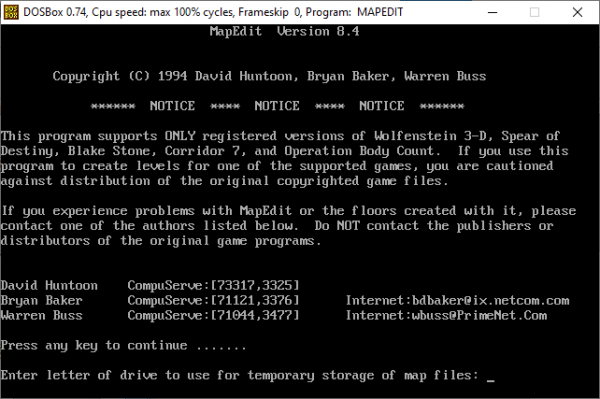 The first of these updates came around a year later with the release of MapEdit v8.0. This update came with massively expanded documentation (Courtesy of Warren Buss), and a whole heap of functional improvements to the program.
These improvements most importantly included support for Blake Stone: Aliens of Gold, the first non-iD Software game compatible with MapEdit.

While support was implemented for those games, the ability to edit the shareware versions of the games was removed at the behest of Apogee Software, which is speculated to have taken this approach to limit any loss of sales that might be caused.

Unfortunately, this was also when Dave and Bryan started keeping the work closer to their chest; versions of MapEdit from this point on would be released without the source code, meaning only those two men could keep working on the program.

Work would continue on MapEdit over the next year, with general improvements being made and eventually adding support for Corridor 7, Blake Stone: Planet Strike and Operation Body Count.

After bugfixes and updates to the documentation, it seems development on this main branch of MapEdit would cease, with one "unofficial" patch released years later by Chris Chokan to make the program easier to work with.

The short life of MapEdit v9.0

While the official version of MapEdit would be considered complete with version 8.5, BrotherTank (The Administrator of DieHard Wolfers Message Board) would work on his own version, building off of the last version to include the source code (Version 7.2).
This version was 9.0 in name only, neglecting the game compatibility that came with version 8.0+, and setting it up as the editing tool for the MMC (Map of the Month Competition) held on the DieHard Wolfers Message Board.

It never received a proper release, leaving MapEdit 8.5 as the definitive "final" version of the program at current.

Bill Kirby's quick work in response to Wolf3D's release helped solidify the early creative community of Wolfenstein 3D, and thanks to the steady stream of updates it received MapEdit will forever be an important part in the community. Decades later, MapEdit still sees regular use in projects, even if purely for nostalgia.

This wasn't the end of where development of level editors would go. As time would go on, modders would get more imaginative and creative with the scope of their projects, requiring editors of equal power to keep up with the ambition.