A long term goal he had been slowly working on, Ian Franken started Wolf-Bytes in 2004 as a newsletter to share an assortment of Wolf3D related articles:

The initiative sourced material from interested members of the DieHard Wolfers community, edited together into a newsletter format and emailed to anyone subscribed.

Many people expressed interest in contributing following the launch. This lead to articles from several prominent message board members including Ian himself, Dugtrio17, Xarkon, and Hair Machine.

After some delays, three issues were published for the newsletter in a monthly format from September to November of 2004. As time progressed, improvements were made including the addition of HTML in the third issue to help readers navigate.

However, when it came time for the fourth issue, there were further delays. What was to be a delay of a few days turned out to be several months, when instead of publishing an issue, Ian announced major structural changes to Wolf-Bytes at the start of February 2005. 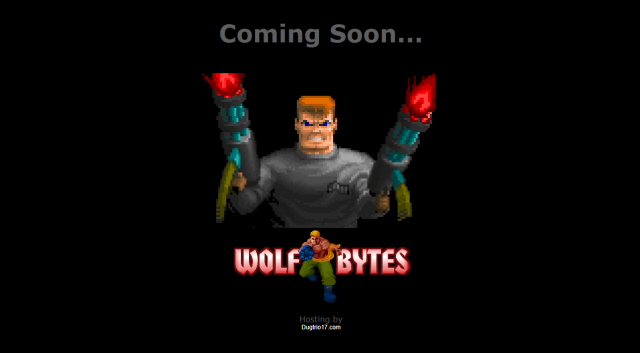 Mostly dropping the connotations of a newsletter, Wolf-Bytes was to be published to a new website as an "online webzine type-thing", to use the technical term. It's unknown whether this was to still be a monthly release of issues, or if content would be published like a blog with new interviews and reviews added as they became ready.

This announcement of things to come was the last major update, with Ian later reporting that other priorities were causing delays to Wolf-Bytes, but he would be returning to it when possible.

Just months later in April though, Ian would take a step back from all things Wolf3D, including his work on Wolf-Bytes and moderation duties on DieHard Wolfers. He cites a few reasons, including not enjoying being "tied down" with commitments like moderating the forums.

Ian would all but disappear from the community as time went on, with his last visit to the message boards being 2014. While Wolf-Bytes didn't last long, it was well-received, and still provides a fun read and snapshot of a time since past.

Text versions of all three released issues are included below. Unfortunately, the intact HTML version of Issue #3 has not been located.

It's also unknown if a copy of Issue #4 exists, which is insinuated to be practically ready for publication before the major changes were announced in 2005.