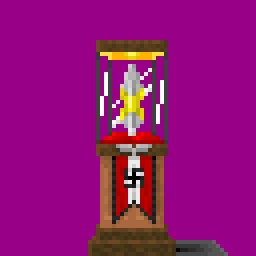 Blessed by the blood of Christ and cursed by grasp of Hitler, the legendary Spear of Destiny rests quietly, encased in a glass pedestal decorated with Nazi regalia. It's an artifact so mythical, that it is secured in a castle so well fortified. Many a great stories have been told about the spear and the leaders that lived by its side, but none are as interesting as that of Adolf Hitler's. For it was during the time that he possessed that many world leaders wished they had it, as they believed that, with the power of Christ, it could turn the tide of the war in their favor.

I had a lot of fun making this sprite, particularly because of the detail I incorporated here. I decided to make the spear look like its real life counterpart, as opposed to its appearance in-game. The spear head lies on a red pillow inside a glass case mounted on a wooden pedestal with a flag hanging on its front. Every color present on the sprite comes from the Wolf3D palette.

Feel free to use or edit with proper credit.
Included in the ZIP file are the BMP and PNG image files. Edit appropriately when modding into EC/LZWolf.
This sprite was made/modified by Justy Zam for the Spear Me The Details contest hosted on Wolfsource.net in September 2022.