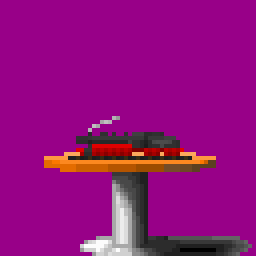 Hermann Goering had a massive train set with lots of functioning locomotives and beautiful rolling stock at Castle Wolfenstein. Whenever high-ranking members would visit, he would entertain them with his train set. One day, the new model locomotive he had ordered arrived, and the guards received the parcel. Desperate for entertainment, the guards unboxed the model train and ran it on Goering's layout. Afterwards, they displayed it on a static track on the table.

I have a confession to make. I am a train enthusiast and am fascinated by locomotives and railways. I'll elaborate on that later on, for this page is for the table sprite.
This table edit consists of the original Wolf3D table, with the only modification being the German "kreigslok" locomotive and track. The locomotive sports the livery it wore in real life during WW2, with a reichsadler (eagle) painted on its tender, and steam coming out of its funnel. These additions to the sprite were made using the Wolf3D palette.

Feel free to use or edit with proper credit.
Included in the ZIP file is the BMP and PNG image files. Edit appropriately when modding into EC/LZWolf.
This sprite was made/modified by Justy Zam for the Table-scaping contest hosted on Wolfsource.net in May 2022.

This sprite was made using Paint dot Net.

Submitted as part of the "Tablescaping" - Table Art Contest.