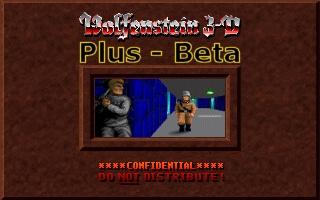 Finding a way to implement complicated features in mods without editing the source code has been a consistant goal over the years for many. Of the most popular of these has been the DECORATE scripting language used in the ECWolf and LZWolf source ports, which has enabled designers to create experiences such as Operation: Wasserstein II.

While the philosophy doesn't change, each attempt has generally had its own approach to the matter. The source port WinWolf3D looked to use Visual Basic, and was to provide a "growing" scripting language as well. Then there was Wolf17, a special editor that created additional game files holding gameplay variables, allowing designers to tweak things like player health for their game.

Going back even further to mid-late 2003, BrotherTank of the DieHard Wolfers Message Board revealed he was working on a special project...

Wolfenstein Plus (Which at various times was also referred to as "Wolfenstein ME" and "Wolfenstein Revisited" due to naming conflicts) was to be for people who wanted to create complex mods, but didn't want to learn programming. As long as you were willing to edit a map, you would have a whole world of customization ahead of you. 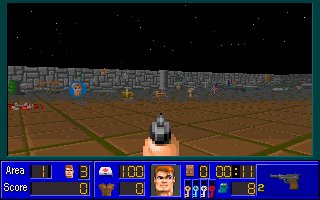 Intended to be a "designer's kit", BrotherTank announced two core philosophies behind the conception of Wolfenstein Plus:

BrotherTank (with assistance from MCS) saw to implementing as many general features and additions as he could into the game. Given the limitations in the DOS engine's memory (Wolf4SDL and even Wolf4GW were years away), a lot of effort went into overcoming those limitations, cleaning up the code to degrees not normally required by the typical Wolf3D project at the time.

As of the 9th of February 2004, BrotherTank was able to boast many features, sourced from various tutorials and ideas around the community:

There were many more features, minor and major (Such as gun-bobbing), and there was a promise that if memory limitations weren't reached, more would be added.

With all these features, there was still a question of how BrotherTank intended to allow users to customize the game for their individual projects. The source code wasn't going to be released to the public, yet many people would not require outside atmospheres, or would require them on particular levels.

To solve this issue, new menus were created with toggle-able options and minor tweaks, including:

As some of the available effects were things that would change the atmosphere or gameplay to an extent (Another option was weapons dictating player speed), it is interesting that these are things a player could change, though for some features this could be speculated as to allow for "lower-end" computers of the time to be able to handle more feature-heavy games.

In addition to these options, BrotherTank and MCS reportedly created one of the first instances of the "Map Control" feature - using tiles in the map itself to control and turn in-game features on and off, or change settings.
As an example, the game could check the top-left corner tile of the entire map, see what wall was placed in that spot, and depending on the type of wall it could tell the game to make it a starry sky, or a cloudy sky, or a roof.

Placing the above tiles in the first map of Wolf3D makes Wolfenstein Plus generate the following: 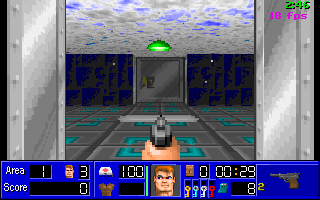 Without those tiles, there would just be the standard flooring and ceiling, as well as no countdown timer, shading effects, etc.

Wolfenstein Plus was designed to have a lot that could be altered through this method; not just features like shading and atmospheric skies, but also to control the behaviour of objects in the game, and even change the music played.

After the impressive feature listing in February of 2004, BrotherTank largely went silent in regards to the game until later that year when it was revealed to be finished. However, it was being delayed to allow MCS and AReyeP to release their major game, Spear End of Destiny. This was because their game shared many of the features of Wolfenstein Plus (Including Map Control), and there was a chance that too many similar games may come out quickly and drown it out.

In the month before End of Destiny's release though, BrotherTank had another special announcement to make. Something following the same philosophies as Wolfenstein Plus, but offering something very unexpected. 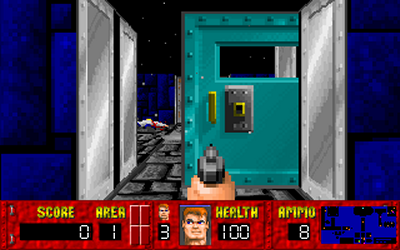 BrotherTank instantly had the attention of many people in the community. During discussion of Wolfenstein Plus, BrotherTank had expressed the desire for the ability to have transparent surfaces in Wolf3D, a feature that had not existed in a mod prior. Here it had become a reality, made possible by significantly modifying the raycaster, based on DarkOne's work on NewWolf.

This was a seperate offering to Wolfenstein Plus, which was revealed to be finished, offering similar features with slight divergences (Directional Sprites/Billboards reportedly couldn't work with Wolfenstein Advanced, but were in Wolfenstein Plus).

While wall and door transparency was definitely a major highlight, the feature list for Wolfenstein Advanced was reported to include most of the features from Wolfenstein Plus, and: 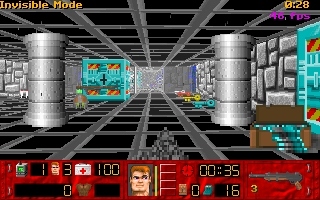 Over time this feature list would expand greatly as memory limited were constantly pushed; adding (and scrapping) a driveable jeep, as well as powerup lighting effects, and smaller but significant gameplay changes such as enemies being able to operate pushwalls.

While there were many who praised BrotherTank for his accomplishments and drooled over the screenshots, there were also those who shared a mixture of concerns and criticism.

The criticisms were leveled against the meer concept of such a kit, expecting it to lead to a lack of experimentation in coding or a flood of poorly made mods overusing the larger features.

While the cancellation of Wolfenstein Plus appeared to be a consequence of this depression, BrotherTank later expanded to explain that the project was similar enough in direction and scope to Wolfenstein Advanced that it made more sense to focus on one project.

The hiatus was ultimately shortlived, with development picking back up in December, and one can assume continuing sporadically over the next year and a bit until early 2006.

Unfortunately it was in February of 2006 BrotherTank was in a serious car accident, leaving him with severe injuries and major legal issues that would take forefront in his life. Those injuries inhibited his ability to work at a computer, which in combination with his legal issues taking up spare time caused progress on Wolfenstein Advanced to slow to a crawl with no significant progress updates released.

While this was all happening, Ripper would see to making and releasing the Wolf4GW and Wolf4SDL source ports in 2005 and 2007, which eliminated the memory limitations present in the DOS engine.
A lot of time BrotherTank would spend on Wolfenstein Plus and Wolfenstein Advanced was focused on saving memory, effectively rewriting a lot of code to handle things better. With these source ports making that work largely redundant and Wolf4SDL also bringing Wolf3D into the native Windows space, it is possible that they served to further diminish BrotherTank's motivation to finish.

The current status of BrotherTank is currently unknown with his last visit to the message boards being in late 2017, but hopes are that he is getting on okay.

While this attempt to help modders may never be released, it's still quite an interesting project to consider, and it would have been cool to see the projects that would have been born from it. Who knows what the future may bring, though? As BrotherTank once said:

I promise the community that it will not die... you will see it... I just can't give an exact date.

Thank you to TheTalentedMrLeo for assistance in the creation of this article.